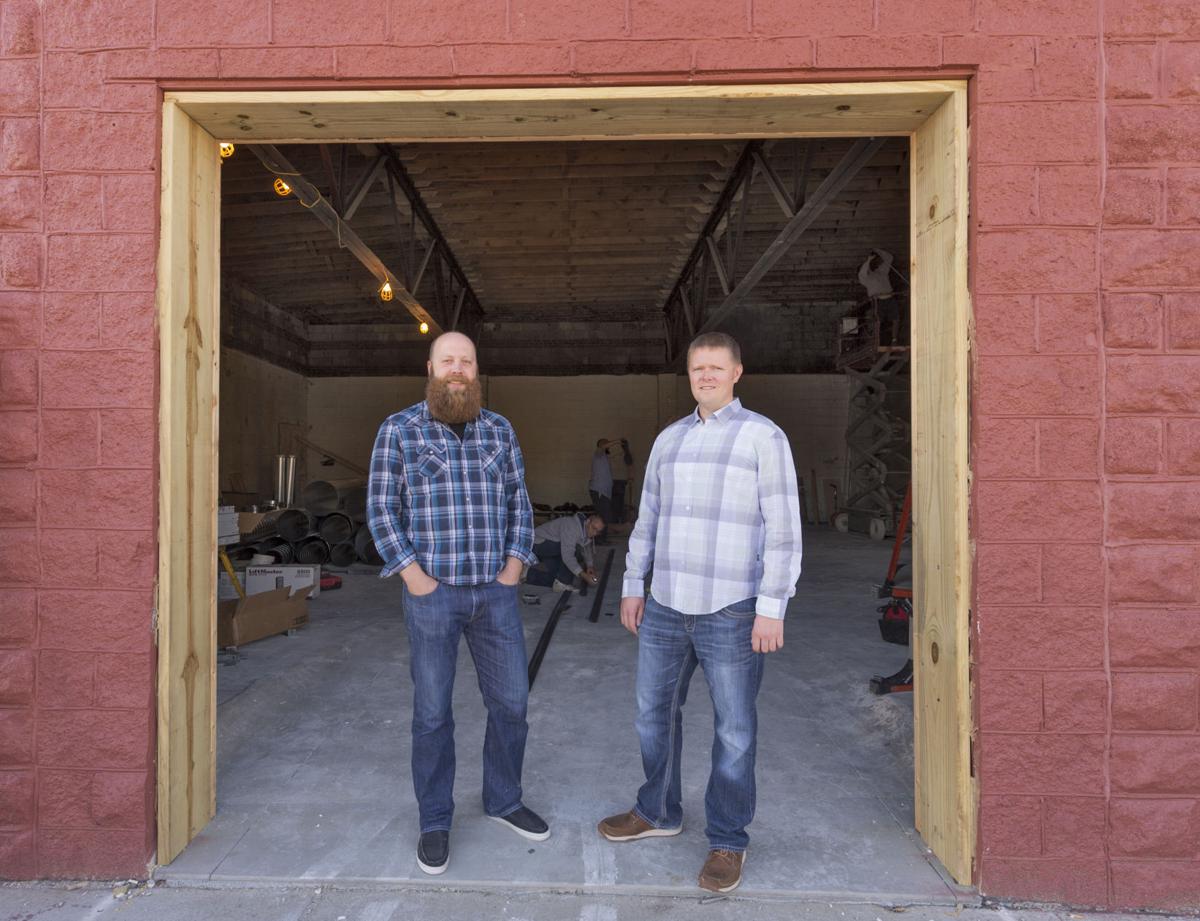 Matt Gohring (left) and Adam Holmberg are the brains behind Code Brewing, 200 S. Antelope Valley Parkway. The brewery is under construction and they hope to be open by the end of the year. 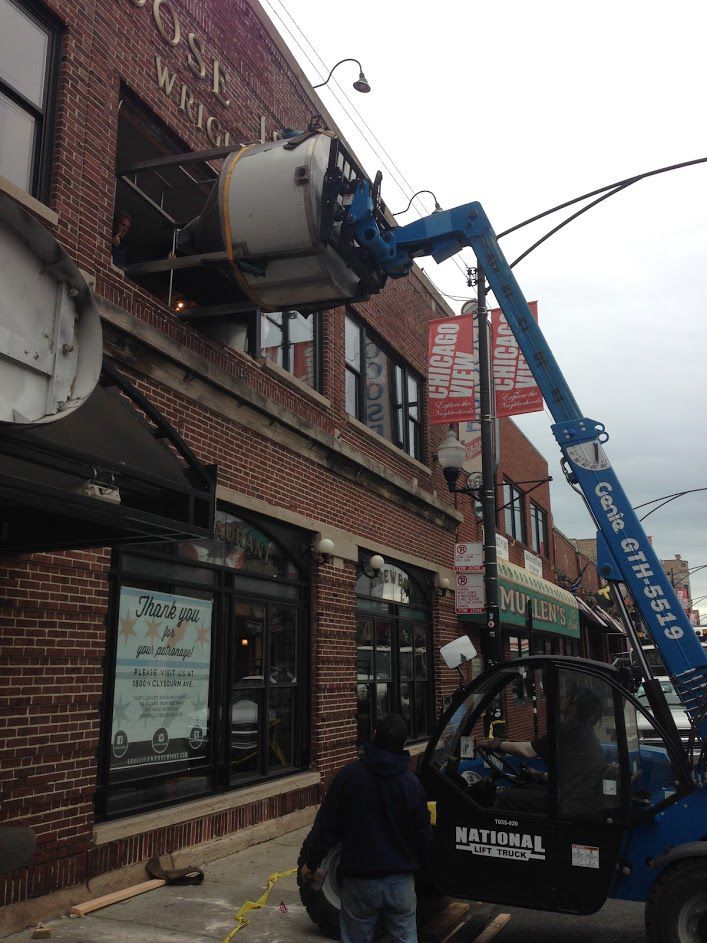 A small crane lifts a piece of brewery equipment out a second-floor window at Goose Island's Wrigleyville brewpub last fall. Lincoln brewery Code Beer Co. bought the equipment from the shuttered brewpub and brought it to Lincoln to use in the brewery that is under construction.

If you are a fan of Goose Island beer, you might want to consider checking out Lincoln's newest craft brewery under development.

But they will be brewed on the same equipment as those brews once were.

When their brewery was just an idea, long before they had a location picked out, Matt Gohring and Adam Holmberg were looking for brewing equipment.

The two founders of Code Beer Company wanted something that was the right size and affordable. And they just happened to find the right deal in the Wrigleyville section of Chicago.

That's where Goose Island was closing down its brewpub there at the end of the Chicago Cubs' season last fall.

When Gohring found the equipment for sale online, he immediately called Holmberg and said, "We have to get this right now."

Holmberg agreed, so "I told them we'll take it right now," Gohring said.

"We bought it sight unseen."

Holmberg said that while the Goose Island story attached to the brewing equipment is nice, "we bought it less for the name and more for the opportunity."

It was the right size and the right price, he said.

The brewery equipment, which they trucked back to Lincoln last November, is still sitting in storage, but it will be installed soon.

Gohring and Holmberg are "crunching through the construction phase," building out a space at 200 S. Antelope Parkway that they hope to open before the end of the year.

Gohring said they had actually targeted another building nearby but weren't able to negotiate a lease.

They targeted the area around N Street and Antelope Valley Parkway because they see huge opportunity there. It's on the west end of the developing Telegraph District, which in a few years will be home to hundreds of employees and residents. It's also "downtown adjacent," Holmberg said, and right next to the N Street bikeway.

"We like being next to the bike lane," Holmberg said, noting that biking and craft beer have a strong connection.

Holmberg is Code Beer's business manager or, as his business card reads, "business in front."

Gohring is the brewmaster or, as his card reads, "party in back."

He said he has been home brewing since about 2007 after getting "bit by that bug."

Gohring and Holmberg decided more than a year ago to try to make a go of it full time and will soon join a fast-growing local brewing scene.

One new brewery, Boiler Brewing Company, opened this spring in the Grand Manse downtown, and two others, White Elm Brewing Company and Backswing Brewing Co., are planning to open this fall.

Gohring and Holmberg say they still see plenty of room for new craft brewers in the market.

"Most of the people I know who are really excited about craft beer won't order the same thing twice," Gohring said.

And he plans to cater to that by producing "infinite beers."

Gohring said Code Beer will have a few beers on tap all the time and then use other taps to rotate through some experimental batch beers. Its license also allows it to have guest taps, although it plans to focus on serving its own beers.

He said the first year or so the company will likely focus on brewing for the taproom. Though they will rough out space for a kitchen, that will likely be down the road a bit. Distribution also will be a future aim.

For now, though, they will concentrate on getting the space built out and the brewing equipment installed.

Once that phase is complete, the focus will turn to beer.

"We want to make the absolute best beer we can and then keep working on refining it," Gohring said.

One of Lincoln's most successful craft brewers is expanding with a second location.

If you like to experiment with new beers, then Lincoln's newest craft brewery may be right up your alley.

On May 1, when Kelsey Graves got the keys to what would become 1867, she and four friends went in to begin the process of peeling off three la…

Flatwater Bistro closes; bar and grill to open in Haymarket

The owners of an Omaha bar and grill are planning to open a Lincoln location in the Haymarket.

Before deciding to open a second 9 South CharGrill location, Brett Richardson did the math -- figuring out the distance in miles between the n…

Lack of a dinner crowd forced Dickey’s Barbecue Pit to close its downtown restaurant and reopen in the Gateway Mall, according to its owner.

In early spring, as Tim Thomssen readied Boiler Brewing Co. for its grand opening in the Grand Manse, he was also thinking a bit ahead, to the…

Just weeks after the grand opening of Zipline's beer hall in a South Lincoln neighborhood, the brewery announced Thursday it will expand next …

Since the dawn of time, Tim Thomssen said, beer has required four key ingredients. Lite is not one of them.

Alcohol may be banned at the University of Nebraska-Lincoln, but researchers and others soon will be able to make beer on campus.

Nebraska brewers are rallying their devout drinkers against a legislative bill they say would damage the state's hopping craft-beer scene.

Matt Gohring (left) and Adam Holmberg are the brains behind Code Brewing, 200 S. Antelope Valley Parkway. The brewery is under construction and they hope to be open by the end of the year.

A small crane lifts a piece of brewery equipment out a second-floor window at Goose Island's Wrigleyville brewpub last fall. Lincoln brewery Code Beer Co. bought the equipment from the shuttered brewpub and brought it to Lincoln to use in the brewery that is under construction.