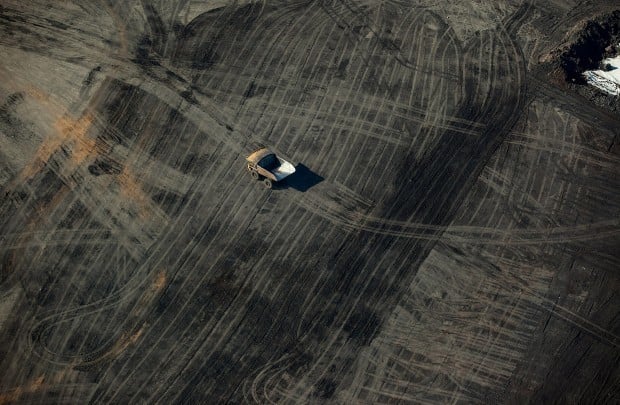 A truck heads to pick up a load during mining operations in this aerial view of the Suncor Energy Inc. base plant in the Athabasca Oil Sands near Fort McMurray, Alberta, Canada. 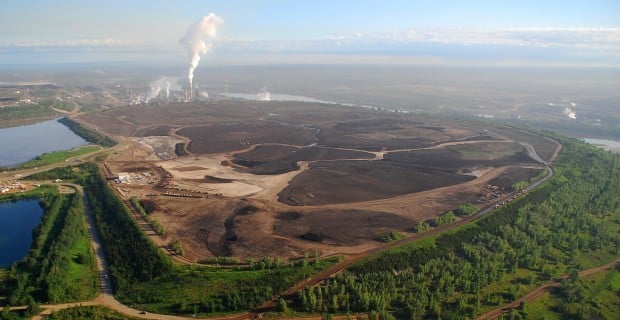 Suncor Energy says it is the first Alberta oil sands company to convert a tailings pond to a stable surface solid enough to be revegetated. This is a 2010 view of Pond 1 at Fort McMurray, Alberta.

Berkshire Hathaway Inc. reported a new half-billion-dollar stake in Suncor Energy Inc., which started the Canadian tar sands oil industry, after Chairman Warren Buffett and his deputies spent the most money on stocks in a quarter since 2011.

Buffett's firm owned 17.8 million Suncor shares June 30, a stake valued at more than $500 million in the Calgary-based producer of heavy oil from the Alberta tar sands, according to a federal filing. Suncor is Canada's largest oil and gas producer.

With the Suncor investment, Buffett further injected himself into the debate over tar sands oil and the Keystone XL pipeline, which, if approved, would carry the bitumen condemned by environmentalists.

"Investing in oil is investing in the past and it's investing in climate change," said Daniel Kessler, a spokesman for the environmental group 350.org. "It's not ethical to try to profit off of the same companies that are destroying the climate."

Jane Kleeb, executive director of Bold Nebraska, which opposes the Keystone XL and tar sands oil development, said by email:  "The only silver lining is maybe the right-wing blogs can stop pushing the lie that Mr. Buffett is secretly giving Bold Nebraska money to stop the pipeline so his railroad benefits.

"While investing in tar sands might be great for the corporate bottom line, family farmers and ranchers along with communities near the mining and refining of tar sands are dealing with the toxic aftermath of such an extreme form of energy. I can only hope with Mr. Buffett's involvement, tar sands corporations will actually start caring about our land and water," Kleeb wrote.

Berkshire, as usual, did not respond to requests for comment.

"Our oil sands operations are the focus of Suncor's business," Suncor says on its website. "We were the first company to develop the oil sands, creating an industry that is now a key contributor to Canada's prosperity."

Unidentified analysts quoted by CNN said it's likely Buffett bought Suncor because it's a good old-fashioned value and is well-run.

Canadian oil companies including Suncor have benefited as the gap among oil sands crude, Western Canada Select and U.S. benchmark West Texas Intermediate narrowed from a record $42.50 per barrel in December. Producers are working around a shortage of pipelines that was depressing Canadian heavy crude prices by moving more volumes to market by rail.  Berkshire also owns BNSF Railway, which is moving a lot of Canadian crude to refineries.

Suncor also owns several refineries, which help the firm avoid having to sell its crude for the depressed, mid-continent prices.

"Suncor is one of the most heavily undervalued Canadian integrated oil producers," said David McColl, a Morningstar analyst. "It is no surprise that a value investor like Berkshire Hathaway would view it as a phenomenal investment opportunity."

"Whatever the logic is here, it seems that a stake of over a half-billion dollars should be getting more attention than it is," wrote Jon Ogg of 24/7 Wall Street. "Buffett is formally declaring this stake in the Canadian oil sands. We would not be surprised at all if this is just the start of something larger."

In other investments, Berkshire raised its stake in GM by 60 percent to 40 million shares, valued Thursday at about $1.4 billion. Berkshire also added to its investments in Bank of New York Mellon Corp., Wells Fargo and US Bancorp.

Berkshire also reported a new holding of about 550,000 shares in Dish Network Corp., the satellite TV company. Berkshire exited a stake in newspaper publisher Gannett Co. in the quarter and cut bets on Kraft Foods Group Inc. and Mondelez International Inc., maker of snacks such as Oreo cookies.

Some of the recent stock purchases have been made by Todd Combs and Ted Weschler, money managers hired in the past three years to oversee a portion of the portfolio. The filing doesn't say who is responsible for each pick. Buffett has said the larger holdings typically are his.

The filing omitted some data that was reported confidentially to regulators.

In a separate filing, Berkshire said it spent about $4.64 billion on stocks in the three months ended June 30. The last time the company bought that much was in the third quarter of 2011, when Buffett was building its stake in IBM, one of its Big 4 holdings, along with Wells Fargo, Coca-Cola and American Express.

A truck heads to pick up a load during mining operations in this aerial view of the Suncor Energy Inc. base plant in the Athabasca Oil Sands near Fort McMurray, Alberta, Canada.

Suncor Energy says it is the first Alberta oil sands company to convert a tailings pond to a stable surface solid enough to be revegetated. This is a 2010 view of Pond 1 at Fort McMurray, Alberta.