Gas prices were not the main reason Mark Richardson bought an electric vehicle earlier this year, but the timing of the purchase turned out to be "icing on the cake."

Richardson, a Lincoln attorney, said he and his wife almost bought a Tesla two years ago but decided to buy a hybrid SUV because they have two kids and felt they needed something with more room. They weren't planning on buying another car for a few years, but then his wife's car broke down and they decided to get serious about buying an electric vehicle.

They looked at several new models, he said, but nobody had anything in stock and it was going to be months or even years before delivery.

But then Richardson lucked out when a friend who's in the Navy got deployed to Japan for 2½ years and decided to sell his Tesla.

"It was a situation for us where all the stars just really aligned, and by the time we bought it, it was just a no-brainer" because of gas prices, he said.

Richardson, who called it "an easy decision" to buy a Tesla, is among a growing number of Nebraskans buying electric cars.

According to the latest data on vehicle registrations from the Nebraska Department of Motor Vehicles, there were 3,091 electric vehicles registered in the state as of June 30. That's 971 more than there were 12 months ago, an increase of 46%.

The pace of purchases has accelerated as gas prices have risen. Nebraskans added 407 electric vehicles in the six months from June 30 to Dec. 31 of last year. But in the first six months of this year, there were 564 electric cars added to the DMV rolls.

There was a similar trend with hybrid vehicles, as the state added 3,524 over the past 12 months.

While the surge in electric vehicles is not surprising, with the number of electric cars and hybrids on Nebraska roads steadily growing over recent years, it comes at a time when registrations for other types of vehicles are declining.

According to the latest DMV figures, there were 1,115,150 gasoline-powered vehicles registered in Nebraska as of June 30. That's down about 1,500 from six months ago.

The Nebraska numbers are in line with national trends that show people are more interested in electric cars in general, with a spike in interest as gas prices rise.

Online car-shopping website CarGurus did a survey last year that showed 30% of automobile owners said they were likely to buy an electric car within five years and 52% said they would probably do so within 10 years.

But the survey also showed that higher gas prices were likely to boost interest in electric cars, with 57% of people saying they would be much more likely to purchase an electric vehicle if gas hit $5 a gallon.

That's something that happened nationally earlier this year for the first time ever, while some states saw average prices top $6 a gallon.

In Nebraska, prices have dropped more than 30 cents since hitting record levels a month ago.

Dakota Buuck, who runs Charged Automotive, a store inside of Dillon's Automotive that specializes in selling electric cars, said he typically sees a spike in demand when there is a surge in gas prices, and that's happened this year.

"We've certainly, beyond a shadow of a doubt, had more local business this year than we've ever had," said Buuck, who has specialized in selling electric cars for the past six years.

But he also said overall inflation and a down stock market mean sales this year will likely not be as good overall as last year, when stimulus money, a strong stock market and lower inflation meant people generally had more money in their pockets.

Buuck said Charged Automotive does the bulk of its business online with out-of-state buyers, and while local interest has gone up, online sales have slowed.

He said the prices of electric cars, which according to Kelley Blue Book average about $10,000 more than similar gas-powered cars, are "not really feasible or reachable for a lot of people."

But for those who can afford the higher purchase price, electric cars can provide huge savings on fuel costs.

Richardson said that since he bought the Tesla, his monthly household spending on gas has fallen to about 35% of what it used to be.

"We have just been thrilled with the purchase," he said.

The states that produce the most renewable energy

States That Produce the Most Renewable Energy

Chamber leaders embark on planning for Lincoln's 'next big leap'

One advantage Lincoln has, a consultant said, is that it is moving into this next phase of strategic planning from a position of strength, with a vibrant economy, low unemployment and a wealth of growing employers.

The state rate was 1.9% in June, the same as in May, which ties for the lowest ever in the state.

The Nebraska Department of Revenue started taking applications Monday for the credits, which are available to retailers that sell fuel with more than 10% ethanol.

Average gas prices in Lincoln drop below $4 a gallon

Gas in Lincoln is still nearly $1 more than at this time last year, and the cheapest prices for gas remain well above gas prices available in Omaha. 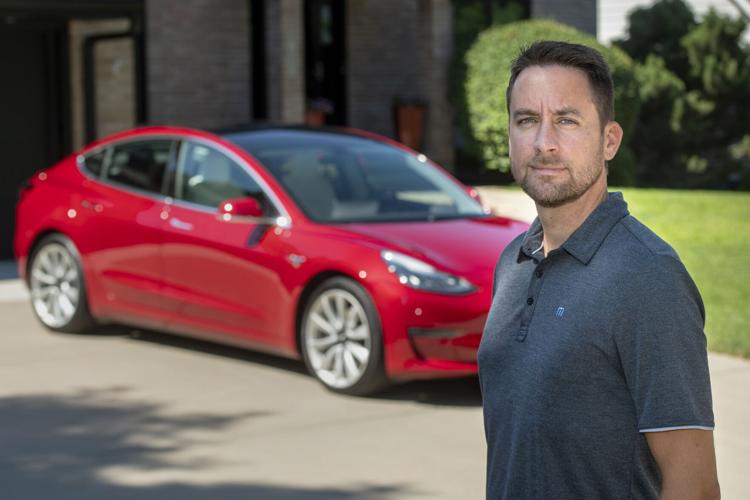 Since buying a Tesla, Mark Richardson said his monthly household spending on gas has fallen to about 35% of what it used to be. 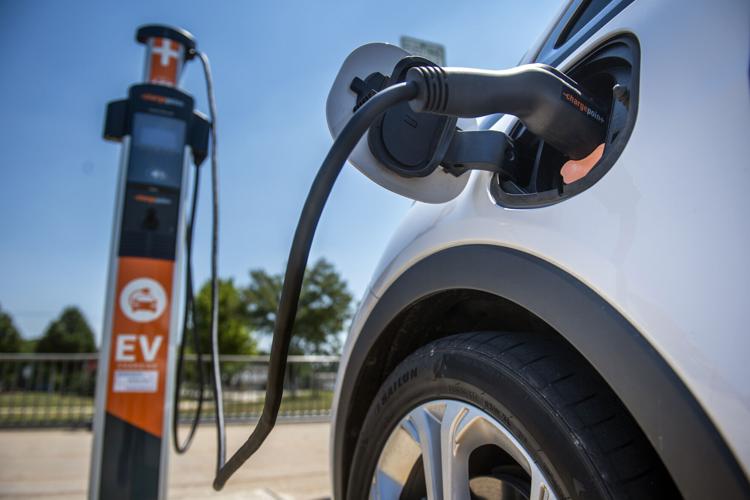 An electric car charges at a station outside Lincoln High School on Wednesday. The number of electric cars registered in Nebraska has increased 46% over the past 12 months as gas prices soared.