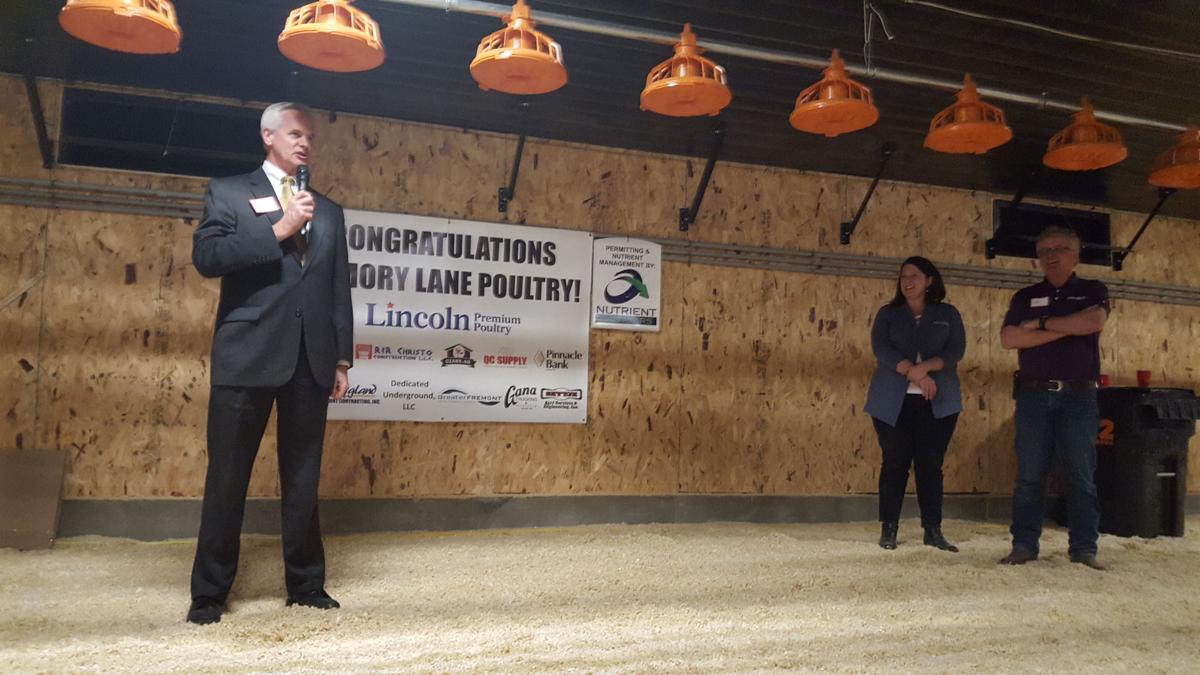 Lieutenant Governor Mike Foley speaks at the open house for one of Costco and Lincoln Premium Poultry's first chicken barns in 2018. 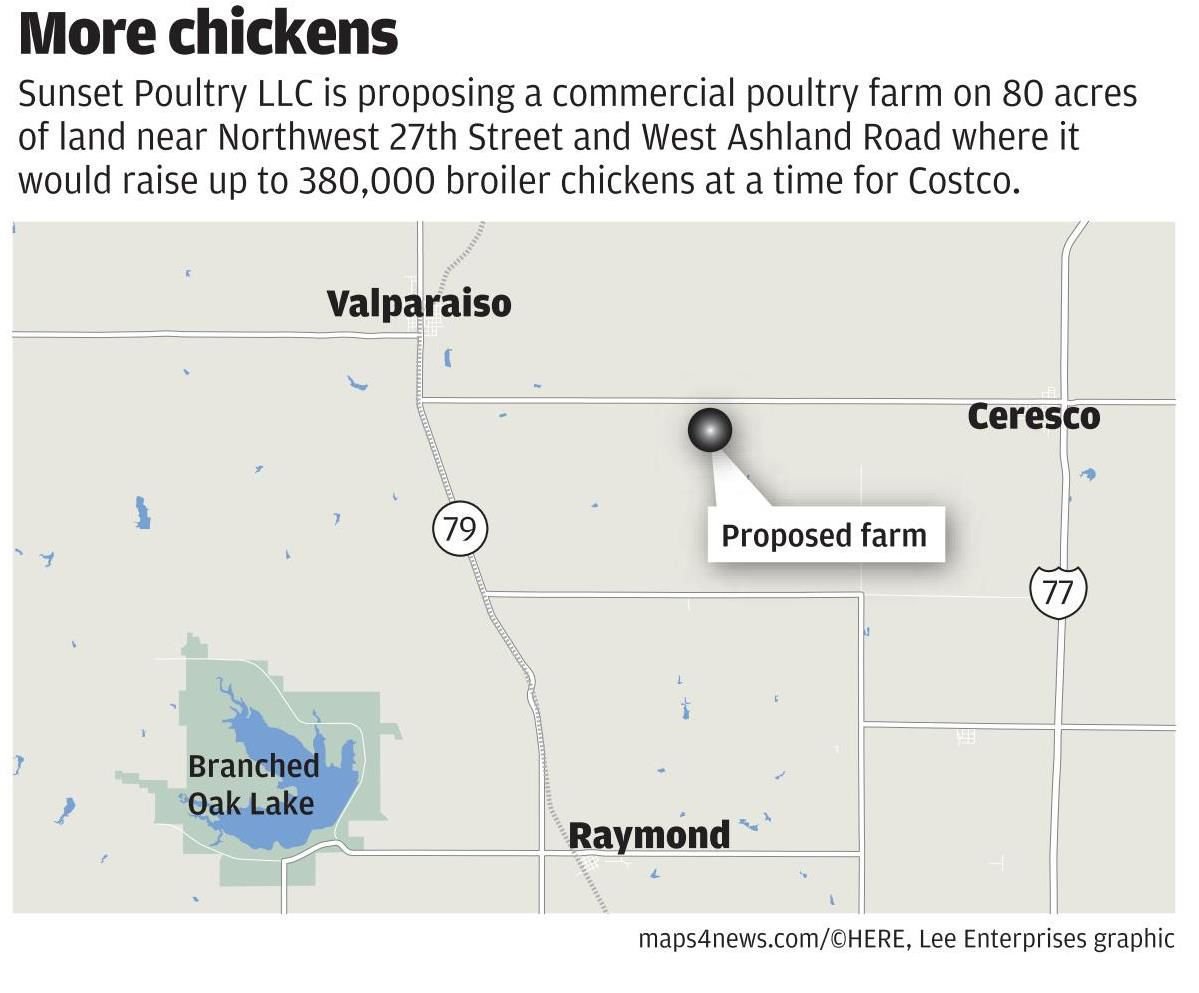 As Lancaster County continues to work to update its zoning laws for large livestock operations, another one is being proposed.

Sunset Poultry LLC submitted an application this month to the Lincoln-Lancaster County Planning Department for what would by far be the county's largest poultry operation.

The application is seeking a special permit for eight barns housing up to 47,500 chickens apiece on 80 acres near Northwest 27th Street and West Ashland Road, on the Saunders County line.

That adds up to as many as 380,000 birds, which would make it twice the size of the poultry operation that was approved in the southwest part of the county last year, and about 75% larger than the current largest broiler operation, Bevans Barns near Waverly.

Jessica Kolterman, a spokeswoman for Lincoln Premium Poultry, the Fremont-based company that is building a plant there to process chickens for Costco, said the proposed operation would provide broiler chickens for that plant.

Despite its size, Kolterman said the Sunset Poultry proposal is a "pretty standard poultry operation," similar to dozens that have sprung up in eastern Nebraska over recent years to provide broiler chickens for the Fremont Costco plant.

According to the application materials, it would have eight 63-foot-by-600-foot buildings that would host six different flocks of birds, which would spend roughly six weeks at a time there, over the course of a year. It would require an average of 20 trucks a week to deliver and pick up the birds and also to provide feed and other supplies.

In addition to the poultry houses, the operation would have two maintenance sheds and a compost shed where dead birds are disposed of. Manure would be removed once per year and applied to fields as fertilizer.

The earlier Costco poultry operation, near Southwest 128th Street and West Wittstruck Road, has yet to begin construction. It faced significant opposition, and a group of landowners appealed the Lancaster County Board's approval in County Court. A trial on that appeal is scheduled for next month.

At least one neighbor to the proposed operation at Northwest 27th Street and West Ashland Road has already voiced opposition to the plan.

Jory and Lori Heiss say the barns would be only 650 feet from their property line, and they are concerned about the threat of air and water pollution, increased water use, increased traffic and a potential decline in value of their property.

Lori Heiss also said in an email that the site is a little more than a mile from Raymond Central High School.

"The implications with regard to air and water quality, spread of disease and increased traffic alone can have serious consequences for our students," she said.

Raymond Central Public Schools Superintendent Derrick Joel said he had not yet received a notification letter from the Planning Department. From what he has heard through the grapevine, he said the increased traffic would be one of his biggest concerns.

He said he planned to include information about the proposal in a weekly brief he sends out to school board members.

"I just think there's a few things we need to discuss as a school board," Joel said.

The first application for a Costco poultry farm in Lancaster County last year spurred officials to take a look at the county's lack of specific zoning laws regarding large livestock operations, which are allowed in agriculturally zoned areas using a special permit and are subject to virtually no restrictions.

A task force has been meeting since March to come up with recommendations for changes. It is scheduled to have its final meeting Tuesday, although Steve Henrichsen, the county's development review manager, said the group is not working under any hard deadline and could schedule additional meetings.

The group presented a draft of proposed zoning changes last month during a public forum. They include specifically defining large livestock operations and requiring them to be at least a quarter-mile from occupied dwellings if they are enclosed, or a half-mile if they are open.

Henrichsen said there is no current moratorium on such operations and the proposed poultry farm will only need to be granted a special permit by the County Board.

Kolterman, the Lincoln Premium Poultry spokeswoman, said the operation would meet the zoning regulations that have been proposed by the working group.

She said the process of accepting grower applications is winding down.

"Almost all of the contracts are signed, with a few that are in the process of being signed," Kolterman said.

There are seven farms that already are raising chickens, she said, and the Fremont plant is on schedule to start processing shortly after Labor Day.

The fight over a Costco-related poultry farm last year laid bare the conflict between agriculture and rural acreages in Lancaster County.

Highlighting how contentious the issue of large poultry farms is becoming in some eastern Nebraska counties, Dodge County, where Costco's new …

MK Meats is hosting a grand opening for its new retail butcher shop in Unadilla on Saturday.

If the letter of the law is all that matters, then it appears the approval of a proposed poultry operation in southwest Lancaster County was a…

County Board denies permit for large poultry farm near Raymond

After a nearly six-hour hearing Thursday, the Lancaster County Board denied a special permit to build a Costco-affiliated, 380,000-chicken far…

There probably has not been an issue more debated and more divisive in Lancaster County over the past two years than this one. I broke the sto…

Lieutenant Governor Mike Foley speaks at the open house for one of Costco and Lincoln Premium Poultry's first chicken barns in 2018.