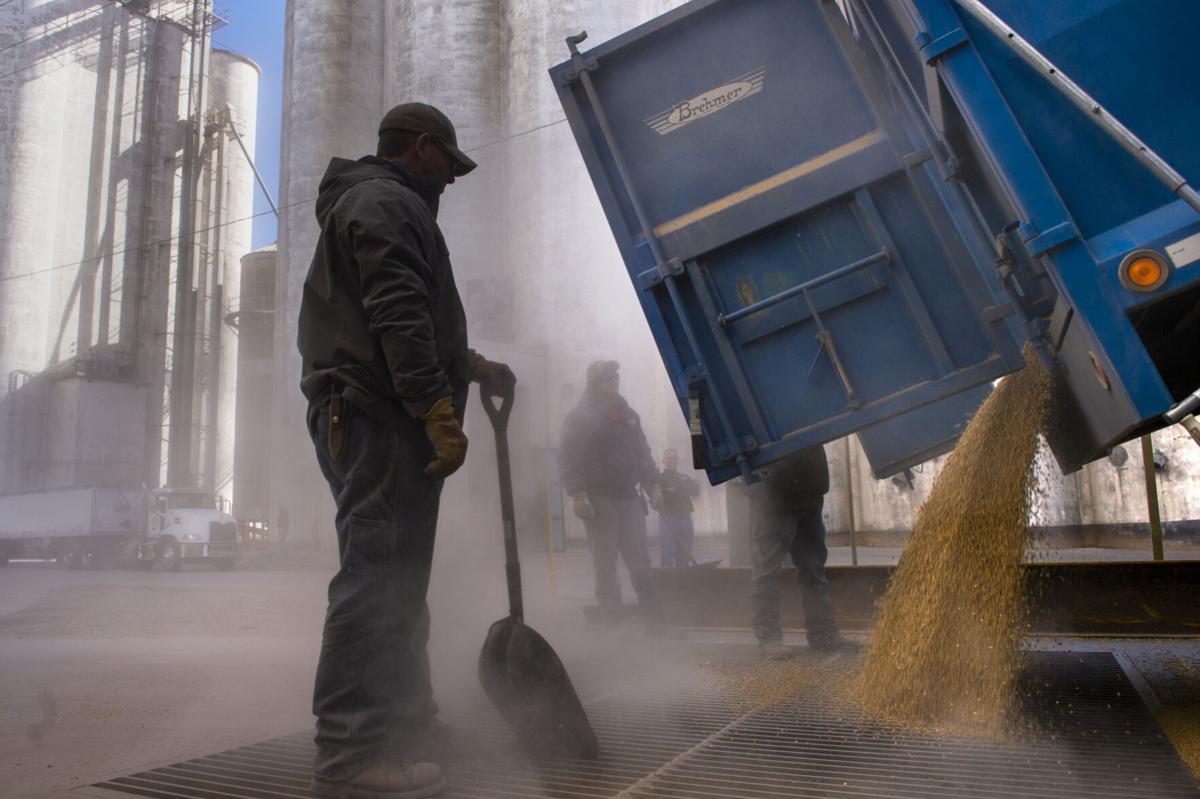 James Bond stands by as soybeans are unloaded at Farmers Cooperative in Dorchester on Thursday. 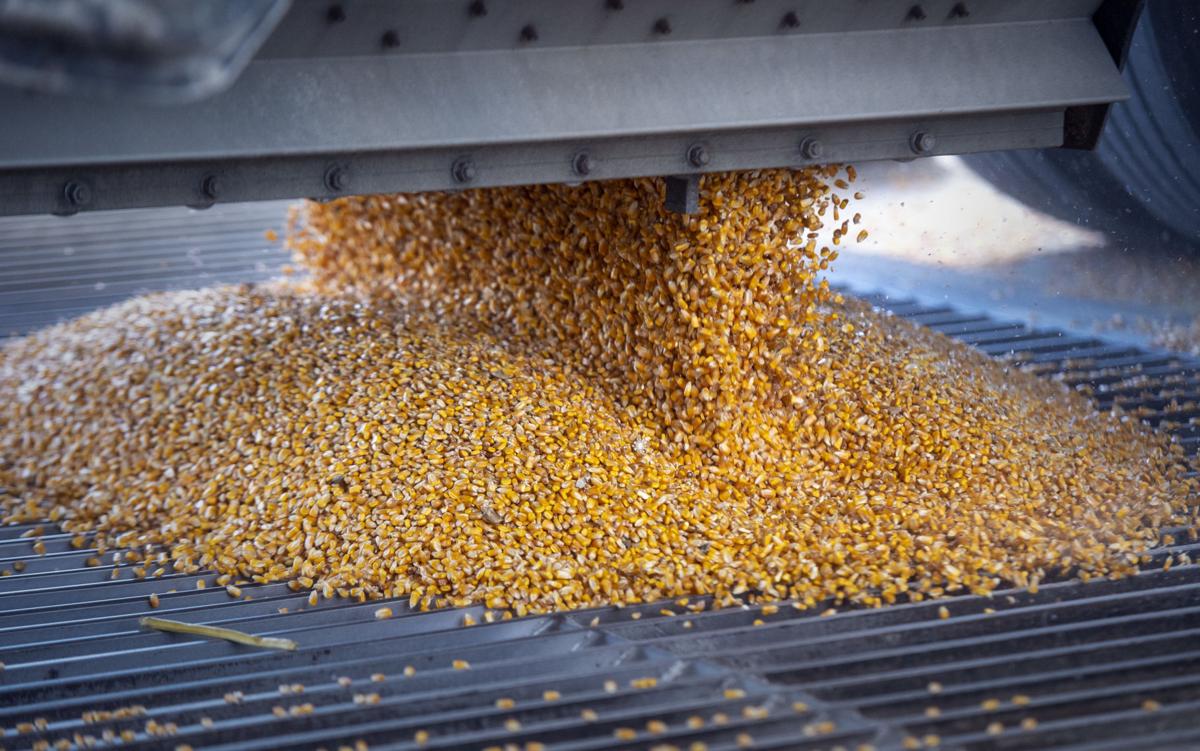 Corn is unloaded at Farmers Cooperative in Dorchester. 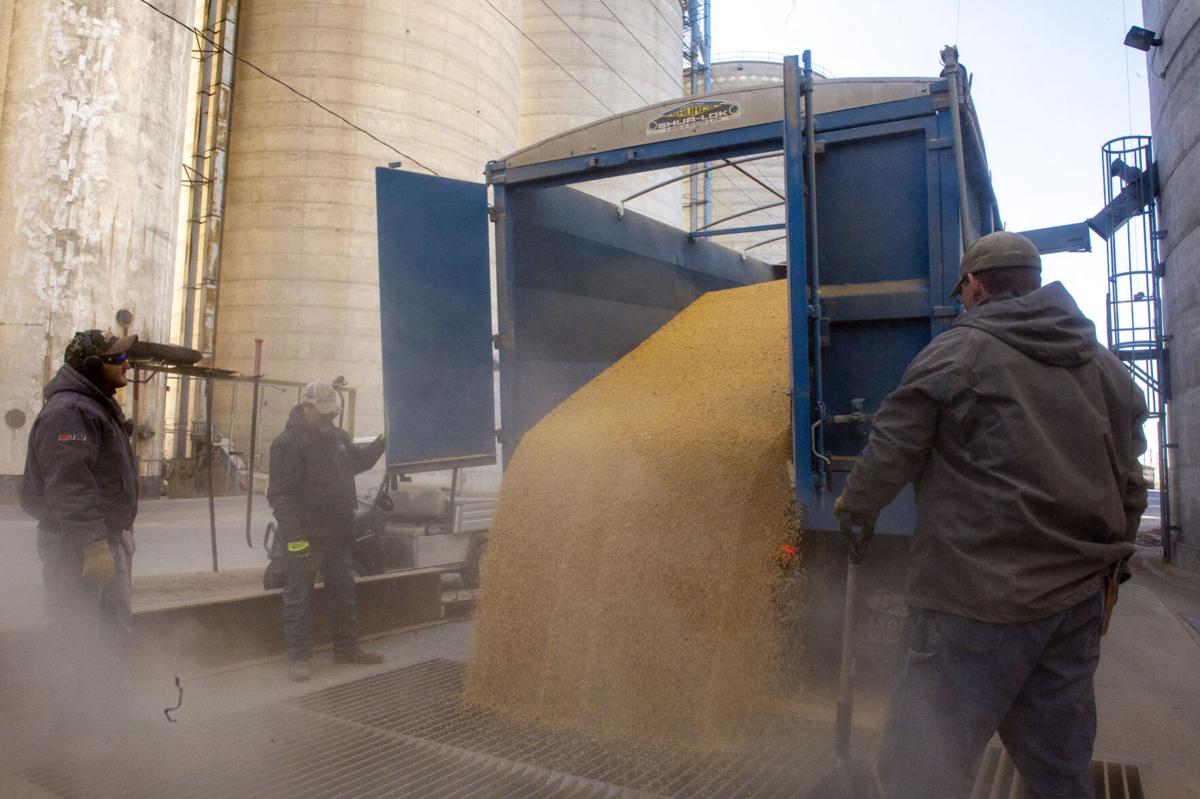 Workers unload soybeans at Farmers Cooperative in Dorchester on Thursday. 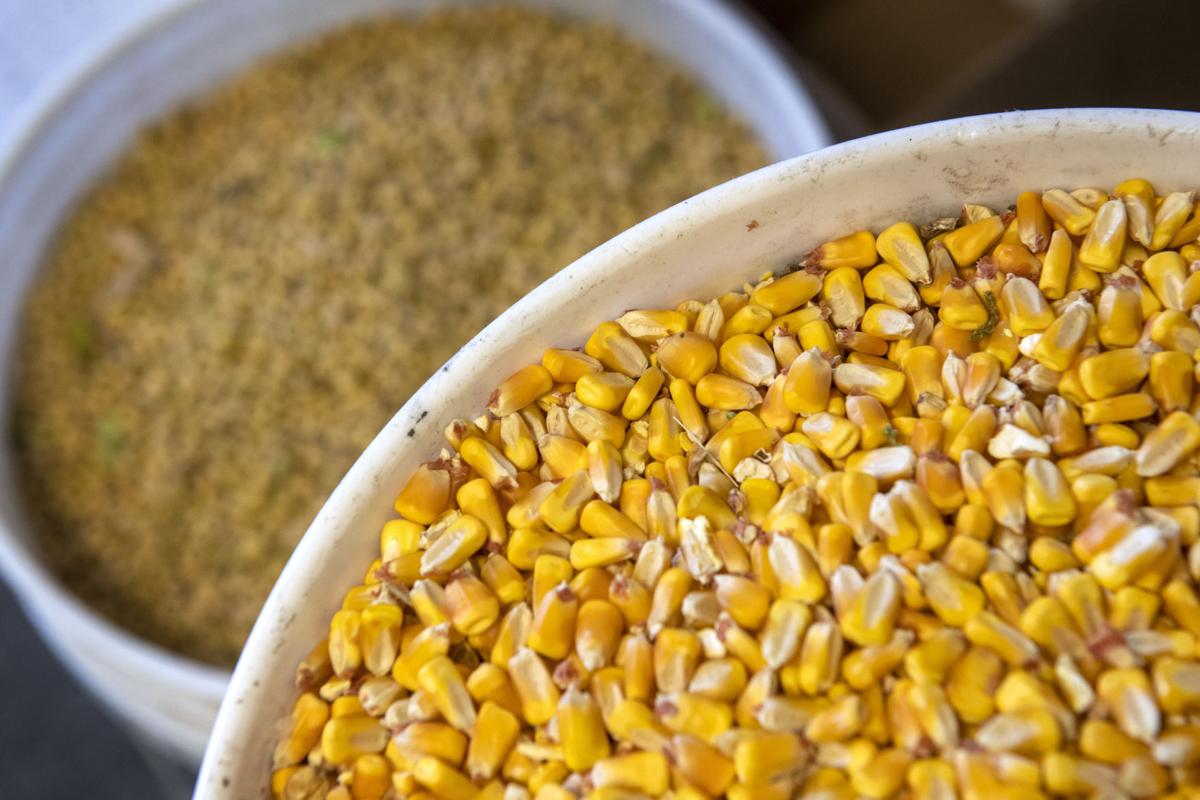 Samples of corn and soybeans are seen at the Farmers Cooperative in Dorchester. 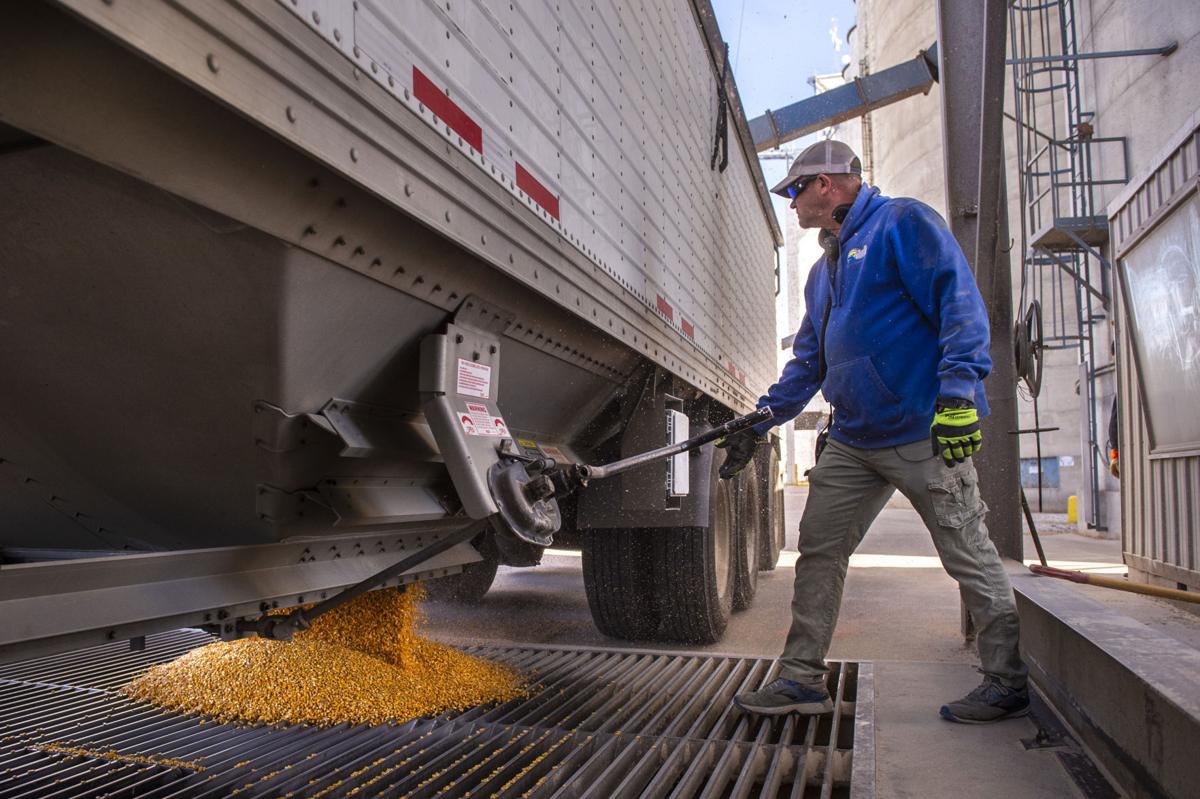 Mike Born unloads corn at the Farmers Cooperative in Dorchester. 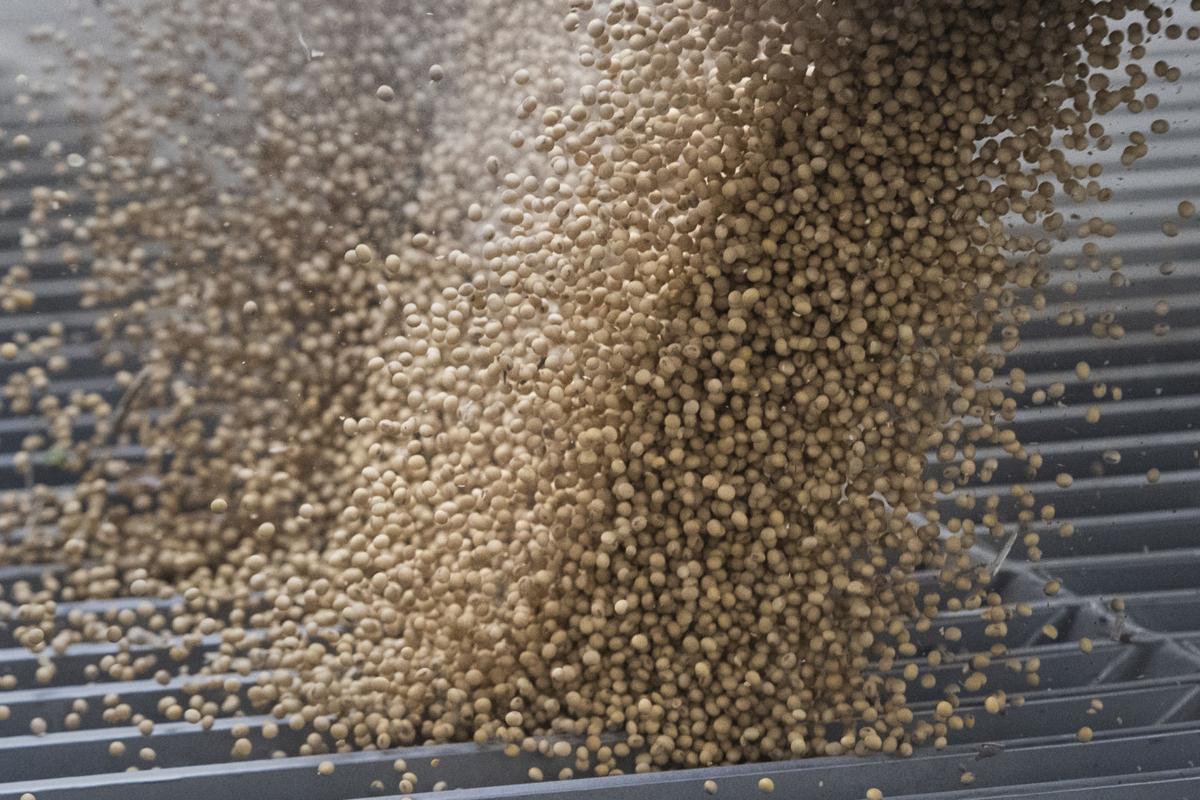 Soybeans are unloaded at Farmers Cooperative in Dorchester. 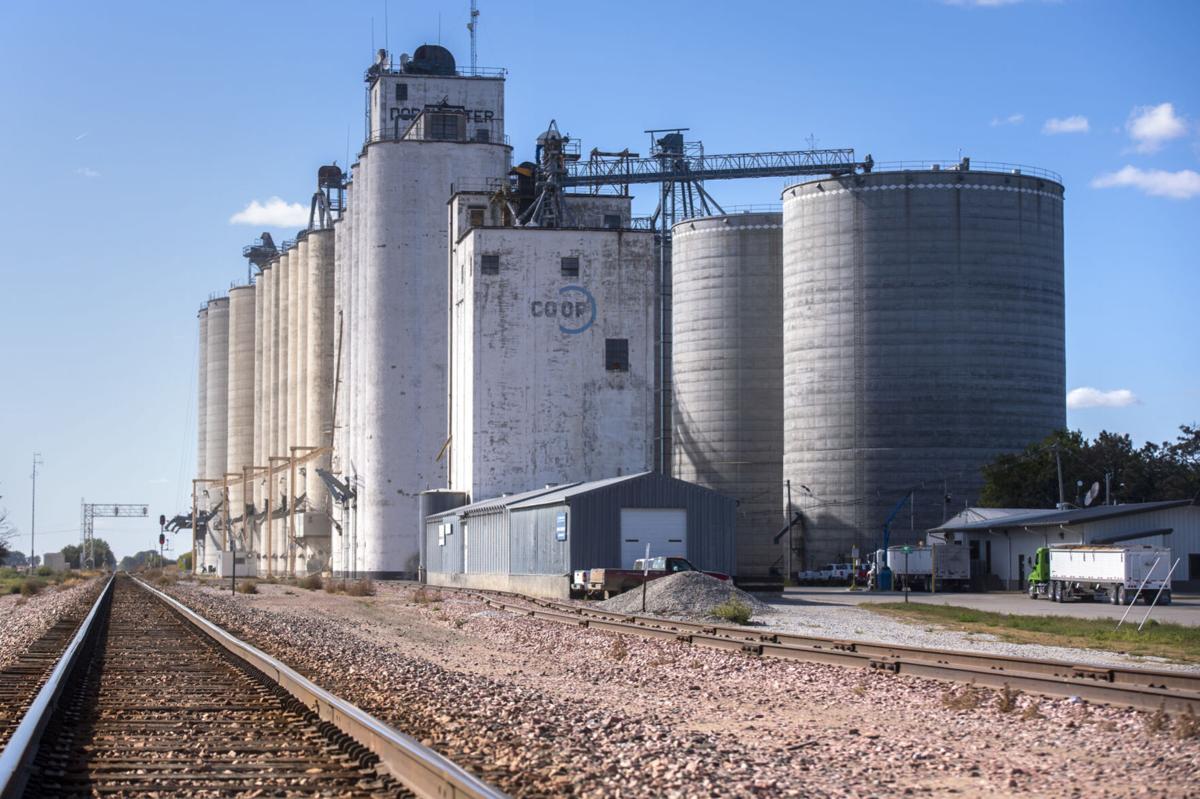 Trucks are lined up to unload at the Farmers Cooperative in Dorchester. 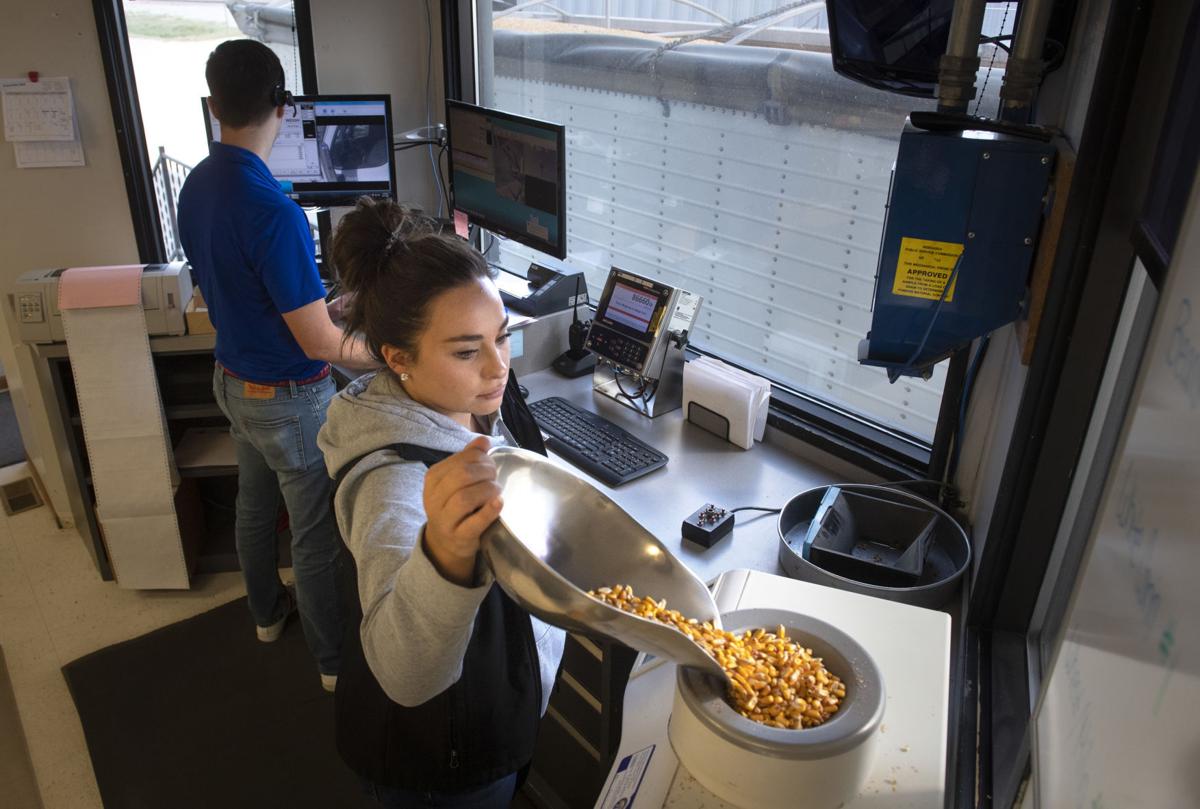 Jordan Clement pours corn samples into a machine to measure moisture levels and weight on Thursday.

The agricultural economy continues to be a force in Nebraska and remains resilient despite recent down years.

That's the conclusion of a report released Thursday by University of Nebraska-Lincoln researchers.

The 2017 Economic Impact of the Nebraska Agricultural Production Complex report, authored by UNL ag economists Brad Lubben and Jeffrey Stokes, along with Eric Thompson of the Bureau of Business Research, found that agriculture accounts for nearly 34% of business sales, 22% of the gross state product and nearly a quarter of the state’s jobs.

The study provides a benchmark assessment of the economic impact of Nebraska agriculture, using data from 2017, which was the year of the most recent Census of Agriculture. It also happened to be the lowest-income year for farmers and ranchers of the decade.

In 2017, the total output of Nebraska’s ag production complex was $81.8 billion, according to the report, accounting for 33.9% of the state’s total output. The state’s ag sector contributed $25.7 billion to Nebraska’s gross state product, representing 21.6% of the total. Even in a year such as 2017 with low commodity prices and modest farm incomes, between one-fifth and one-fourth of Nebraska’s economy was attributed to ag production.

“Few other states have an economy with this degree of agricultural prominence,” said Mike Boehm, vice chancellor for the Institute of Agriculture and Natural Resources and vice president of agriculture and natural resources for the University of Nebraska system. “Even as our cities grow and our economy diversifies, agriculture remains critically important to the economic prosperity of Nebraska, and it will long into the future.”

The report also found that agriculture is a huge driver of employment in Nebraska. Workers engaged in ag jobs during 2017 earned an estimated $14.3 billion, including income, wages, salaries and benefits, accounting for 19.9% of all income earned by the Nebraska workforce. In total, 321,000 workers — 23.3% of the state’s workforce — were employed in a position connected to Nebraska’s ag industry.

"Understanding the vast majority of Nebraskans will never sit behind the steering wheel of a combine during harvest or start their day feeding livestock, the findings in this report clearly show that many Nebraskans are still connected to agriculture through the jobs that are created as a direct result of production agriculture activities," said Steve Nelson, president of the Nebraska Farm Bureau.

Even though commodity prices were relatively low in 2017, producers still hired workers, bought and repaired equipment and made other business decisions that kept most aspects of Nebraska’s ag production complex strong. This, Lubben said, shows that farmers and ranchers tend to make investment decisions based on long-term trends, rather than on a single good or bad season.

It also may explain why Nebraska has been more insulated from the impacts of COVID-19 than many other states, Thompson said.

“COVID is hurting prices, especially for some commodities,” he said. “But it doesn’t mean the ag sector shut down. The sector still is critical to Nebraska’s overall income.”

Lubben said Nebraska saw a similar effect during the recession of 2008-09. For the most part, he said, commodity prices and international trade markets were strong during that time.

“During the downturn, the ag economy buffered Nebraska from the worst impacts felt by the general economy,” Lubben said.

Whether that happens this time around still remains to be seen. The effects of the pandemic have hit after the state has gone through several years of depressed commodity prices. Ethanol and livestock producers have been hit especially hard.

A report released last month by the state Farm Bureau and the Platte Institute showed that anywhere from 35%-50% of net farm income in the state this year could come from federal assistance.

Lubben, Thompson and Stokes, however, said in the report that they expect continued growth for Nebraska’s ag production complex. Growing middle classes in China, India and elsewhere are creating new export markets. In addition, advances in technology could lead to growth in ag industries including food processing, ag-based manufacturing and biotechnology and transportation.

“Ag today produces more than it did 10 years ago or 20 years ago, and it will produce even more 10 or 20 years from now,” Lubben said. “It’s not withering. It’s only getting bigger.”

The Strengthening Local Processing Act would help smaller facilities expand to meet demand and adapt to the coronavirus pandemic, the lawmakers said.

The designation applies to Colfax, Cuming, Dawes, Dodge, Stanton and Thurston counties and allows producers in those counties and ones bordering them to apply for emergency loans.

They were up by about 200 from the previous week, while continuing claims fell by more than 3,000.

Lanny Johnson said he knew he could count on a few farmers to help finish what the Johnson family had started, but this? “Next thing I knew we had a lot more. This is Nebraska farmers — American farmers. It’s a lifetime of growing up here.”

MetalQuest Unlimited was honored as the state's Small Manufacturer of the Year.

The combine had two Trump flags on it, but fourth-generation farmer Jonathan Rempel declined to say if that was a factor and declined to speculate whether the fire was intentionally set.

“It threw us for a loop … I feel like I lost part of my 2020 harvest experience by not being around,” she said, even though remote access to the farm’s business computer system allowed her to “virtually be in tune with harvest.”

During the height of the coronavirus pandemic, expanded E15 sales helped provide a cushion when 11 of Nebraska's 25 ethanol plants went into a "hot idle" and production decreased by 45% statewide.

Plattsmouth hop farming operation closing, but other activities will continue

“No sympathy, please,” one of the farm operators said. “We’ve had a great experience. What we’ve learned about raising a specialty crop, such as hops, is invaluable.”

James Bond stands by as soybeans are unloaded at Farmers Cooperative in Dorchester on Thursday.

Corn is unloaded at Farmers Cooperative in Dorchester.

Workers unload soybeans at Farmers Cooperative in Dorchester on Thursday.

Samples of corn and soybeans are seen at the Farmers Cooperative in Dorchester.

Mike Born unloads corn at the Farmers Cooperative in Dorchester.

Soybeans are unloaded at Farmers Cooperative in Dorchester.

Trucks are lined up to unload at the Farmers Cooperative in Dorchester.

Jordan Clement pours corn samples into a machine to measure moisture levels and weight on Thursday.