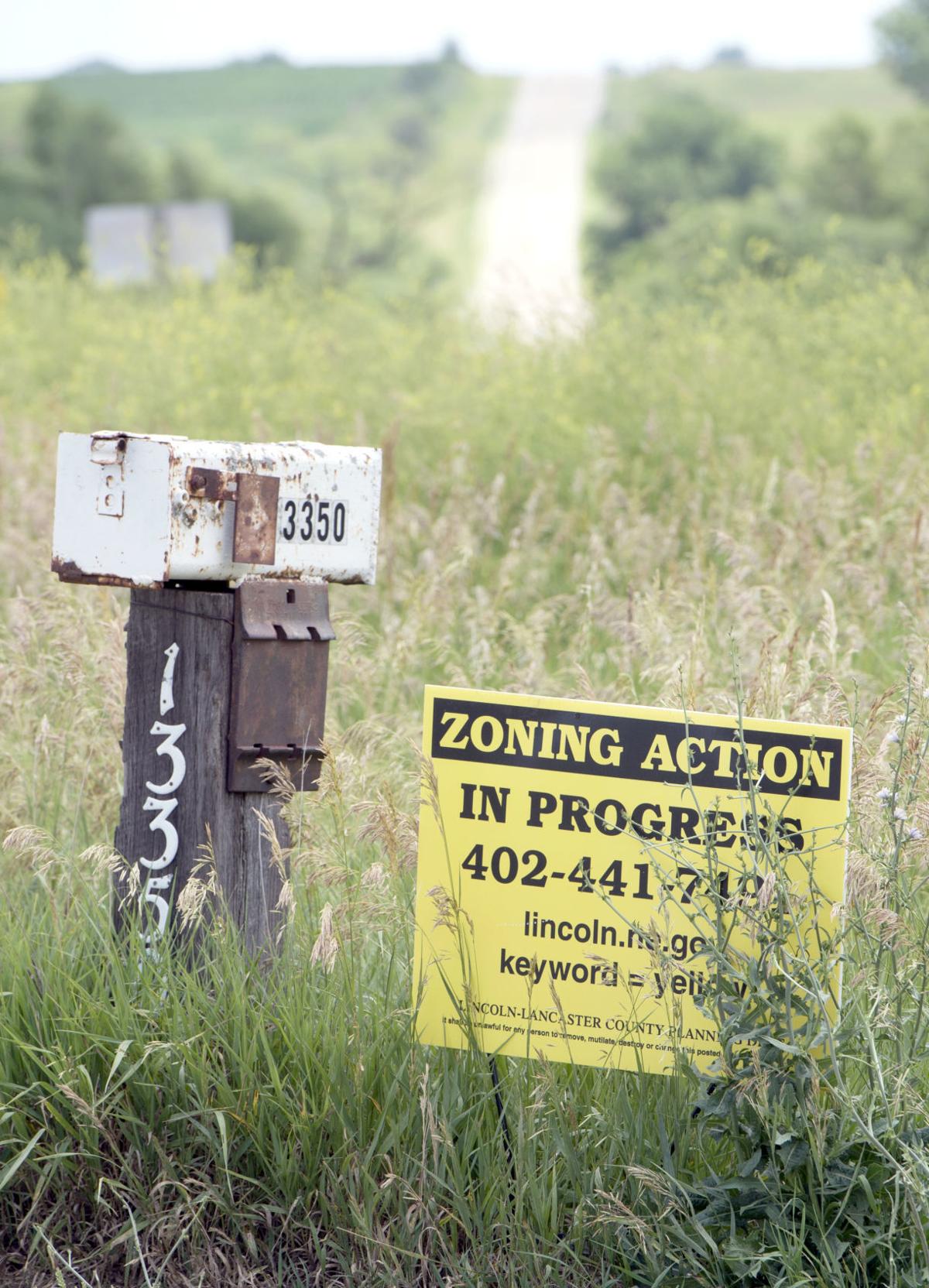 A "zoning action in progress" sign marked the location of a proposed poultry operation at 13350 W. Wittstruck Road last year. 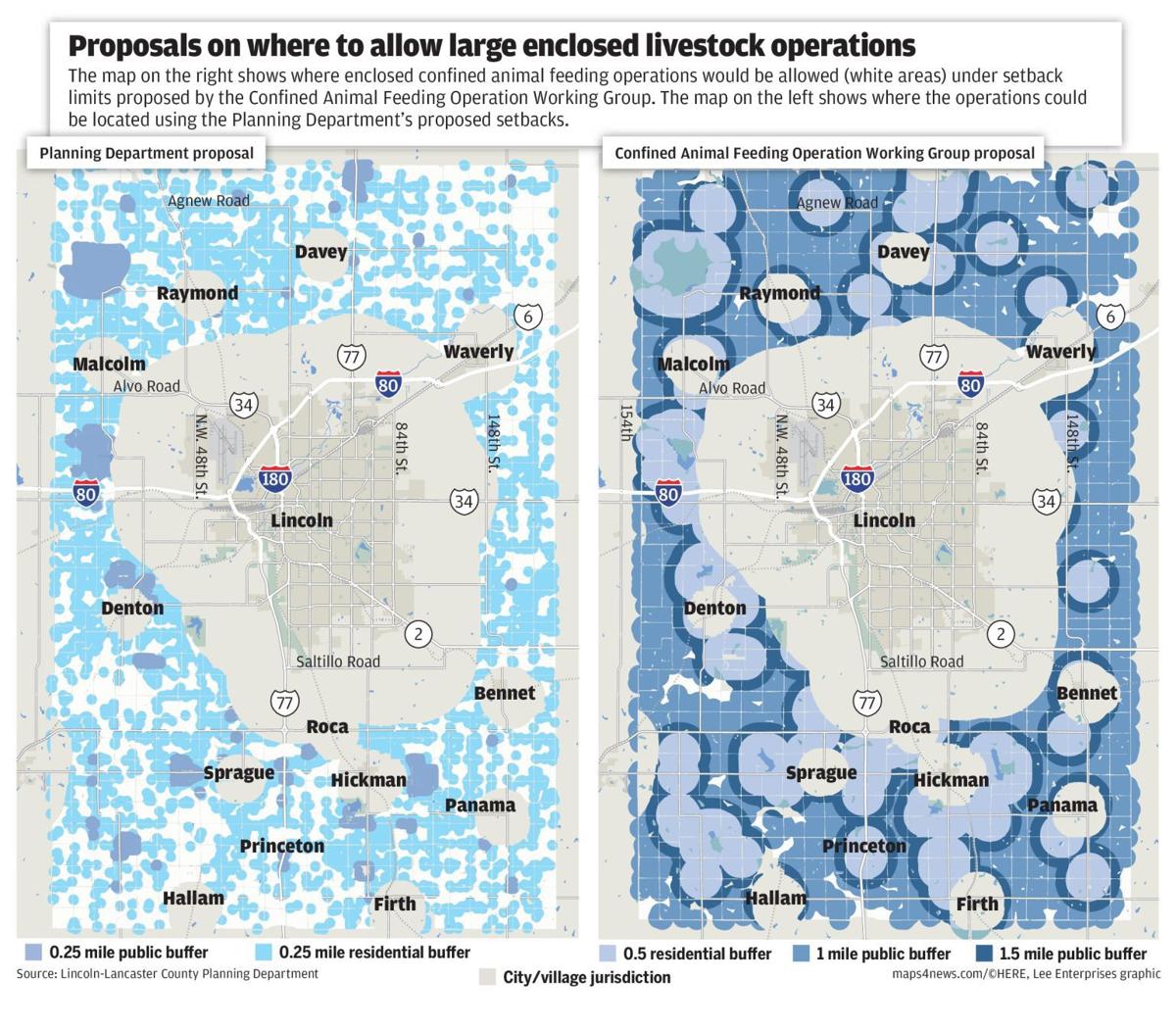 The Lincoln-Lancaster County Planning Department is proposing looser setback requirements for confined animal feeding operations than what was recommended by a task force.

The county formed the task force this past spring to look at setback and other issues after a proposal for a large poultry operation southwest of Denton last year sparked extensive opposition and exposed the fact that the county has virtually no regulations for large agricultural operations.

That operation, which would raise 190,000 broiler chickens for the Costco plant in Fremont, has yet to be built. The County Board's approval was appealed in Lancaster County District Court, and a judge ruled earlier this month that the approval was proper.

The 10-member task force met nearly a dozen times over several months, and in August voted to recommend that large enclosed feeding operations such as ones being proposed in the county be at least a half mile away from any houses and anywhere from a mile to a mile and a half from schools and other public facilities, depending on their size.

However, the Planning Department on Thursday told members of the Lancaster County Board that they believe a quarter-mile setback from both houses and public facilities is more than adequate for enclosed livestock operations.

Steve Henrichsen, the Planning Department's development review manager, said the quarter-mile setback has been used with current poultry operations in the county, including a large one near Waverly, and there have been no complaints.

He also pointed out that having much bigger setbacks for public facilities doesn't seem to make a lot of sense, since they are used much more infrequently than people's homes.

"Why should the setback be greater to a cemetery than it is to a house?" he asked.

The Planning Department also proposed one other change to the task force's recommendations.

The group recommended that applicants submit an approved construction and operating permit from the Nebraska Department of Environment and Energy along with their special permit application.

The Planning Department is proposing that the construction and operating permit be required before a facility can begin operating.

Henrichsen said the state permits are expensive and time-consuming, and much of the application process deals with how the operation will manage manure, something that usually isn't known until much later in the planning process.

The Planning Department supports all other recommendations made by the task force, including requirements for a decommissioning plan, that large operations provide a conservation buffer and an extended public notification period. It also supports a 1-mile setback for open confined animal feeding operations, such as cattle or hog operations, even though that means such operations would be virtually impossible to site anywhere in the county.

The proposed changes to the task force recommendations ruffled the feathers of at least one County Board member.

Sean Flowerday said the Planning Department was showing a "naked disregard" for the work done by the 10-member task force, many of whom are experts in the agricultural field.

"We're disregarding most of the biggest issues here," he said.

Flowerday said he would not support the Planning Department's proposed changes.

"I'll be supporting the CAFO recommendations as they stand," he said.

Henrichsen said the Planning Department spent weeks carefully weighing the task force's recommendations before deciding to make its own recommendations.

He also pointed out, though, that the department's proposal is just a draft and the County Board could choose to put forward some, all or none of it.

Flowerday was the only one of the five board members to publicly express an opinion on the Planning Department's proposed setbacks. Roma Amundson and Deb Schorr both said they feel the board needs to discuss the issue further.

"I don't think we can settle it right now," Amundson said.

Schorr said she wants to talk about the issue more but wants to delay any more discussion until after a public hearing on a second Costco-related poultry application.

That proposed operation, in the northwest part of the county, would have 380,000 chickens. The Planning Commission approved a special permit for it on Oct. 2, but opponents appealed to the County Board, which will hold a public hearing on Nov. 7.

The new proposed regulations would not apply to that application, and Schorr said she doesn't want to risk confusing the issue.

"It is very clear we don't want to intermingle what the task force has done with this current application," she said.

The Lancaster County Board's approval last year of a poultry farm in the southwest part of the county was legal and based on sound reasoning, …

Is a 380,000-chicken poultry operation too large for a roughly 100-acre site near Northwest 27th Street and West Ashland Road?

A coalition of citizen and environmental groups is calling for a moratorium on large livestock operations in the state.

The 400,000-square-foot complex, located on the outskirts of Fremont, began processing chickens Sept. 9 and has slowly been scaling up operations.

Harvest season late but in full swing across Southeast Nebraska

BEATRICE -- After a rainy spring and sporadic fall weather, the 2019 harvest is finally in full swing.

More than $9.5 million in road and bridge improvements are planned for 2020 in Lancaster County's proposed one- and six-year infrastructure im…

Recommendations on changes to Lancaster County zoning rules for livestock operations will go forward to public hearings as originally proposed.

A "zoning action in progress" sign marked the location of a proposed poultry operation at 13350 W. Wittstruck Road last year.