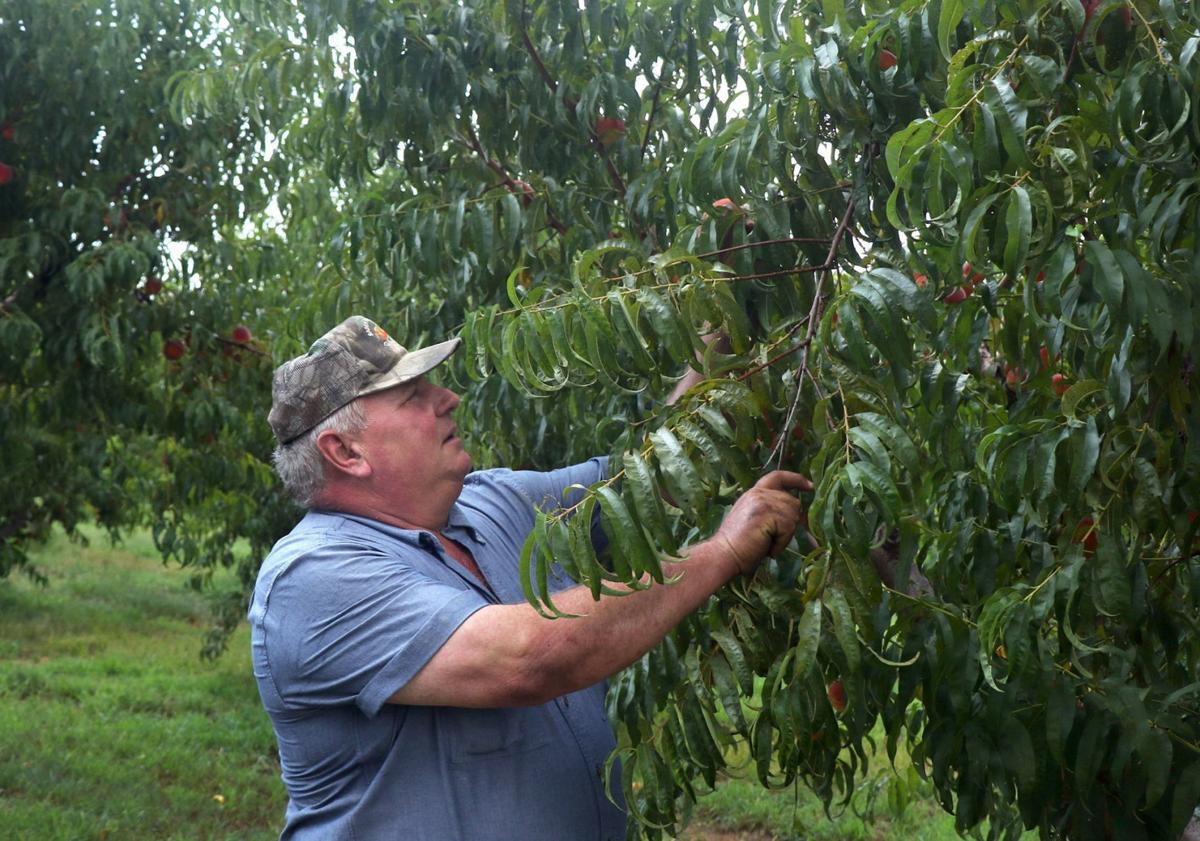 Bill Bader surveys his peach trees for damage he says is from illegal use of the herbicide, dicamba. Bader, who runs Missouri's largest peach farm, says he may end up losing half of his 900 acres of peach trees. 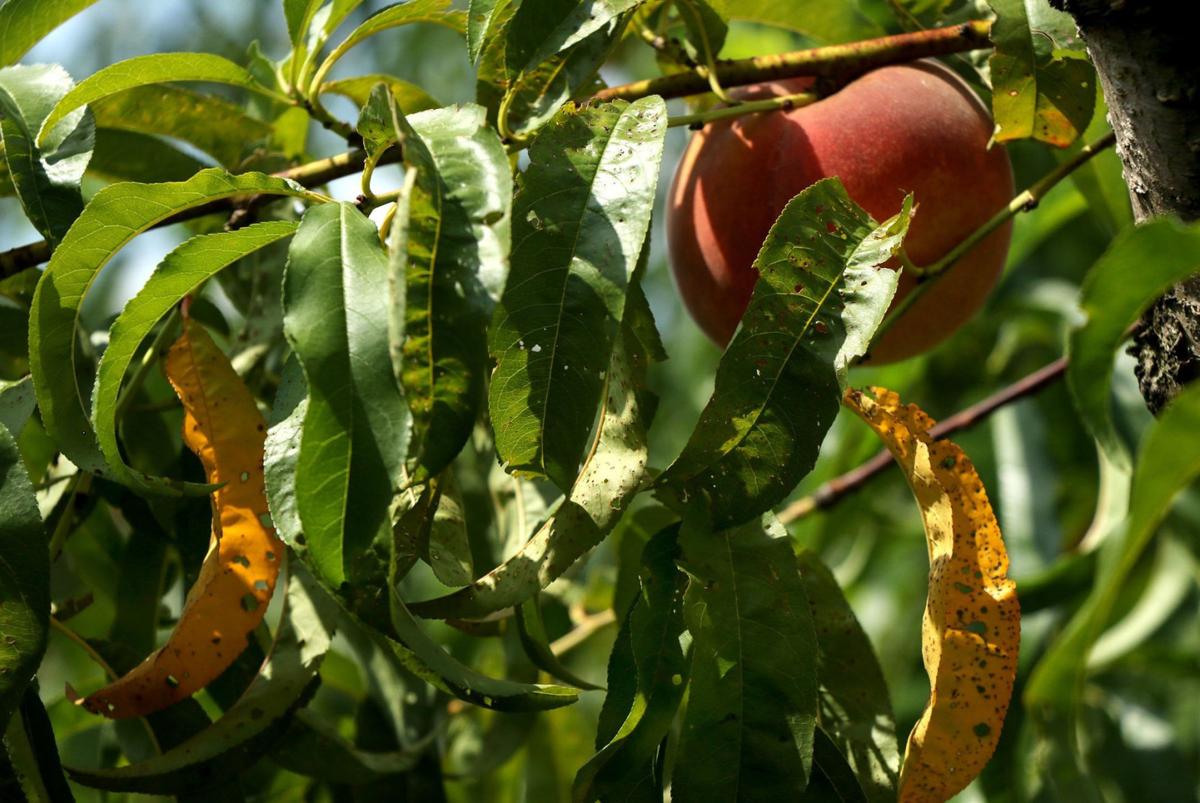 Leaves of Bader Farms' peach trees bear holes and discoloration that owner Bill Bader believes is the result of drift from illegal applications of the herbicide, dicamba, on area farms. Other trees throughout the orchard have branches that are almost entirely denuded.

CAPE GIRARDEAU, Mo. — A trial began in federal court Monday where Missouri’s largest peach farmer blames severe economic losses on damage from the weedkiller dicamba, and on Bayer and BASF, agribusiness companies that have helped usher the technology to prominence.

Stakes are high in the case, filed by farmer Bill Bader, with an outcome expected to influence the pipeline of additional dicamba litigation moving through court from around the country.

“Everyone’s focused on this first trial,” said Paul Lesko, a St. Louis-based attorney involved in other dicamba lawsuits. “The outcome of the Bader trial will be very important for all dicamba actions going forward.”

The trial will be decided by an eight-member jury. Proceedings are expected to last two to three weeks, said lawyers in the case.

A spokesman for Bayer — which acquired Monsanto in 2018 — declined to comment Monday, citing a gag order in the case.

Bader originally filed suit against Monsanto in December 2016, and against BASF later. He contends illegal spraying and off-target damage were a predictable consequence of Monsanto releasing dicamba-tolerant Xtend cotton and soybean seed, genetically engineered to withstand the chemical — enabling growers to spray it without the risk of damaging their crops, but leaving others nearby susceptible to harm.

But when dicamba-tolerant seed for cotton was introduced in 2015, and for soybeans the following year, corresponding dicamba spray varieties were not yet available for use — formulations that are not as “volatile,” or likely to move off target. In the absence of the intended, new forms of dicamba, Bader’s attorneys argue that it was inevitable that growers would turn to illegal, or “off-label,” substitutes of older, more drift-prone varieties of the herbicide — setting the stage for crop damage to ensue.

Widespread dicamba complaints have remained — or even increased — in the years since the new, lower-volatility forms of the chemical were finally approved for use.

Laying out their arguments Monday, Bader’s legal team claims that evidence in the trial will show the companies knew dicamba would cause damage complaints by drifting off-target — and believed their seed and new spray sales would benefit as a result.

“They knew it was going to cause problems,” said Billy Randles, a plaintiffs attorney, in his opening statement, adding that such evidence stretched back to 2010. “(Monsanto) couldn’t control the product in their own greenhouse.”

He said the defendants “so thoroughly anticipated the problem” that they coined the term “driftees,” according to internal company discussions.

“The damage occurring was part of the plan,” said Randles. “The damage was an essential element of selling this product.”

He argued that a principal selling point was to convert “driftees” to customers, to protect them from their neighbors. BASF, for instance, internally touted “defensive planting” as a marketing opportunity, Randles said.

Randles said that dicamba damage has been especially problematic on Bader Farms — a roughly 1,000-acre farm near Campbell, Missouri, in the Bootheel that has been in business for decades. The operation, he said, can’t survive repeated bouts of suspected dicamba exposure and has sustained $20.9 million in damages, according to one estimate.

Another point of emphasis was that Bader blames dicamba not necessarily for killing his trees, but for weakening them and making them susceptible to a wide range of problems that they could previously withstand.

Defense attorneys previewed their own counterarguments. One key area where Bader’s case will be challenged is in proving that dicamba sprayed over the top of Xtend seeds is the source of problems for his peach trees — something Bayer says will be a struggle for Bader’s legal team.

Instead, attorneys for Bayer used past crop insurance claims to point to a list of other issues that the farm has faced for years, including before dicamba-tolerant seeds were first released in 2015.

Rather than dicamba exposure, Miller argued that a major problem for the orchard’s tree health is a root rot disease present on the farm. Miller also deflected accusations of insufficient testing, pointing to the eventual approval of the product granted by regulators at the EPA, and said that although crinkled or curled leaves are a sign of dicamba injury on crops like soybeans, they are typical features for peach trees that do not constitute relevant evidence.

“They cup. They curl. That’s what peach tree leaves do,” said Miller.

Miller acknowledged that Monsanto knew some people were going to break the law and spray illegally — an “unfortunate” inevitability of “human nature,” he said. But he argued that Monsanto acted reasonably, and that “everyone was told” such applications were not allowed.

BASF, meanwhile, said that there is no proof that Engenia — its form of low-volatility dicamba spray — is specifically responsible for damage on Bader’s farm. Attorneys for the company also state that there is no evidence to support Bader’s claim that it conspired with Monsanto in a coordinated effort to boost profits related to dicamba.

“His damage started in 2015,” said attorney John Mandler. “Engenia didn’t come onto the market until 2017.”

Bill Bader surveys his peach trees for damage he says is from illegal use of the herbicide, dicamba. Bader, who runs Missouri's largest peach farm, says he may end up losing half of his 900 acres of peach trees.

Leaves of Bader Farms' peach trees bear holes and discoloration that owner Bill Bader believes is the result of drift from illegal applications of the herbicide, dicamba, on area farms. Other trees throughout the orchard have branches that are almost entirely denuded.